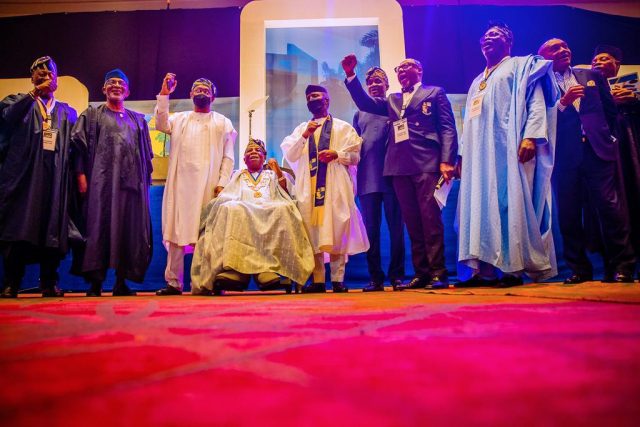 …As Igbobi College shops for #1bn

The vice president of the Federal Republic of Nigeria Yemi Osinbajo has said there is a strong nexus between the kind of education students receive in school and what they turn out to be later in life.

According to him, the values students imbibed and competencies acquired is strongly tied largely to the strong academic performance and discipline such students receive.

Femi Gbajabiamila, Speaker of the House of Representatives commended the alumni of the school for its efforts at raising standards in the College. He said the various interventions by the older students would not only uplift the school but also impact education.

Gbajabiamila urged friends of the school and other Nigerians to contribute to making it a center of academic excellence. “We urge you all to join us in not only uplifting our school but promoting education generally,” he said.

According to him, “The fundraiser with a target of N1 Billion is only in addition to contributions towards “Infrastructural Renewal” that ICOBA members have been making since the return of the College to the Missions by the Lagos State Government. And it is on record that ICOBA’s interventions with investments in both hard and soft infrastructural projects that are focused on improving the standards of education in the College have started to yield positive fruits.”

On his part, Foluso Phillips, Chairman, Board of Governors, Igbobi College Yaba, made an appeal to all the old students of different schools to explore the concept of endowments, which ICOBA is spearheading with this fundraiser.

“A school endowment is an aggregation of assets invested to support its educational and related activities in perpetuity. It represents a compact between a donor and an institution and links past, current, and future generations.” Phillips said.

He posited that endowments provide important financial stability to the school and, even to the local community. Endowments also provide the financial cushion that enables the college to work with towns and cities to improve the quality of local schools and to revitalize neighbourhoods.

Igbobi College was established by the Methodist and Anglican Churches in 1932. It is still on its original site and most of the original buildings are intact. It is one of the oldest legacy colleges in Nigeria and is the alma mater of many well-known Nigerians.

The fundraiser which held at the Eko Hotel and Suites, Victoria Island, Lagos aims to raise N1 billion to revitalize the standard of education at the College ensuring that the students have better facilities, more curriculum options and assisting in their extracurricular development.