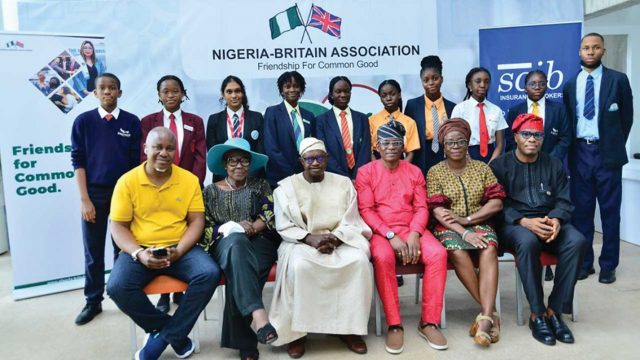 Dansol College student has emerged the winner of the Nigeria-Britain Association (N-BA) school debate organised in honour of Akintola Williams, the Patron of the Association.

The Fan Milk Plc-sponsored competition, held at the British Council in partnership with Scib Nigeria and Company, NEM Insurance Plc saw students try to outdo one another in a Westminster-style debate on the.

The debates, which had preliminary four rounds and a final round that produced the winner, featured topics such as ‘Human capital is a more worthwhile government investment than artificial intelligence’, ‘The Nigerian economy would benefit more from a wider tax net than increasing exports’, ‘Parents should be held more accountable than school administrators for bullying’ and ‘Compulsory vaccination is a recipe for global safety.

Abimbola Okoya, President of the N-BA who addressed attendants remotely, spoke about the objectives and strategy of the N-BA and commended the efforts of the debaters whom she described as winners.

“We have a passion for education and the empowerment of the next generation of leaders. This event is an abridged version in honour of our Patron, Pa Akintola Williams to celebrate his 102nd birthday which he marked last year. This is very important for us at the N-BA because the empowerment of the next generation is one of our core values and also a key element of the Big I.D.E.A, which encapsulates ‘Inclusivity,’ ‘Diversity,’ ‘Empowerment’ of the youth, women and the vulnerable in our society as well as ‘Agility,’ she said.

“In Lagos State, we take pride in education. An event like this is well appreciated by the State as it is one of the many ways of showcasing the progress made in the education of our youths. Lagos State hosted the first national presidential debate, which had 13 states in attendance. The State Government has commissioned 1,449 projects across the state and boasts of several interventions, including infrastructure development, curriculum development, and teachers training,” he remarked.

Abolaji urged the organisers to invite public schools in the State to future editions of the debate.

Shola Tinubu, the immediate Past President of the N-BA noted that the Patron of the N-BA, Chief Akintola Williams, in whose honour the school debate is named, is very passionate about the event.

Present at the occasion were the Patron of the N-BA, Akintola Williams; Vice Patron, N-BA, Olabintan Famutimi; representative of the Governor of Lagos State and Permanent Secretary, Ministry of Education, Abayomi Abolaji; representative of the Lagos State Deputy Governor and Director of Special Duties, Adeyemi Adebayo; and Director of Co-curricular Services, Lagos State Ministry of Education, Sosanya Olubunmi.