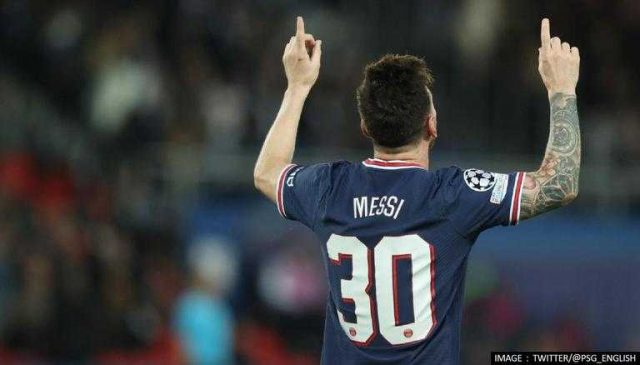 French giant, Paris Saint-Germain has reportedly generated revenue close to €700 million since the arrival of Lionel Messi to the club last season.
Messi, a seven-time Ballon d’Or winner joined PSG from Barcelona on a free transfer last summer.
Nasser al Khelaifi, the club president told Marca that the Parisian giants prior to the arrival of the Argentina captain have never generated so much revenue in just one season (€700 million).
However, Messi has helped the club generate a lot of revenue from sponsorship and merchandise sales since his arrival in Paris. According to the aforementioned source,
Messi The 35-year-old struggled to settle into his new surroundings, bagging only 11 goals and 15 assists in 34 games across all competitions.
The Ligue 1 giants have also added ten new sponsors to their ranks since the arrival of Messi. Director of sponsorship at the club Marc Armstrong said:
“We have certainly seen growth in areas where we could reach agreements of between 3 to 5 million, and now they are between 5 and 8 million, so the impact is considerable.”
Messi’s impact has also been reflected in shirt sales last season. The club sold around one million shirts with almost 60% of them being Messi’s and the number 30 on the back.
PSG equalled their merchandising turnovers from the 2020-21 season of €41 million at just the halfway stage of the 2021-22 season, thanks to Messi. Armstrong said:

“Demand has grown by 30 to 40% and really what can slow it down is supply. When a signing of this size happens, (Cristiano) Ronaldo to (Manchester) United for example, you might think he’s going to get paid by selling shirts, but that’s not the case. You can’t produce a lot of extra shirts.”
He added:

“We are already selling a lot of jerseys, maybe more than any other team in the world for one player, and that puts us at the next level.”
Lionel Messi’s arrival also impacted PSG’s social media presence
Lionel Messi’s signing has also seen PSG take huge strides on social media over the year.
According to Marca, the Parisian giants have gained 15 million new followers across platforms, breaking the 150 million followers mark. Armstrong said regarding the Parisians’ growth online:
“We gained an average of 1.4 million per week and were the first club to reach 10 and 20 million followers on TikTok or the top French brand on Instagram.”
As expected, Lionel Messi’s arrival has also seen the club sell more matchday tickets than ever before. With the signing of a superstar player like Messi, more people have come out to see the 35-year-old and his team in action.

50 Tips and Insights About Productivity, Happiness, and Life