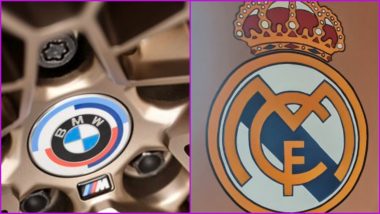 Spanish football gaint, Real Madrid has announced that that it has reach contract terms with BMW, who will serve as one of the team’s primary sponsors and be responsible for providing the first-team players with cars.
The decision was reach having failed to reach an economic agreement in the negotiations held by the leaders of Madrid and the German car brand Audi at the end of last year as the contract is set to expire on June 30.
According to a report by Marca report, beginning July 1, Audi, a major sponsor of Real Madrid since 2003, will no longer be associated with the white team. After failing to reach a contract agreement for renewal by the two parties.
The statement from the club indicates that the white club will increase its cache even further, and Audi also plans to reduce its involvement in soccer teams in order to concentrate primarily on Bayern Munich. Audi, which was in Madrid’s second level of commercial agreements, will no longer be a sponsor 19 years later.
Munich-based BMW also has Mini and Rolls-Royce and is Europe’s leading seller of high-end cars, ahead of Audi, Lexus and Merdedes. It is also a premium sponsor of Milan and has supplied the cars to the Italian team’s footballers since last year, when the German brand decided to enter the world of football as Audi did at the beginning of this century. Now, with the agreement with Real Madrid, it has taken another step forward, as it will have a prominent place in the club with 14 European Cups and in the new Santiago Bernabéu.

Audi, for instance, was present on the stadium benches as well as in other stadium areas and in Valdebebas in addition to providing the first team players with cars. It also gave names to some of the summer competitions where Real Madrid was required to participate by contract but where, logically, there will be no representation for the upcoming season. Similar in terms of presence at Real Madrid will be the agreement with BMW, for which economic data has not yet been released.
Mobility and sustainability between two giants
The partnership between Real Madrid and BMW goes beyond simple sponsorship in that it is organized around a center for collaborative work on sustainability. According to sources consulted by MARCA, it is a partnership or collaboration between Real Madrid and BMW, resulting in the establishment of a shared sustainability center with numerous initiatives in various diversity and sustainability-related fields.
Real Madrid is increasing its revenue in this way, and once the new stadium is completed in June 2023, it will increase exponentially. The club projects that revenue will rise by about 300 million euros, largely as a result of the stadium’s use throughout the entire year. Furthermore, BMW is supposed to play a significant role inside the new stadium.