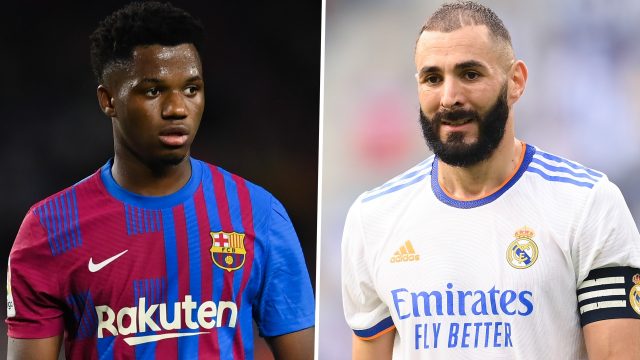 European and top Football clubs across the globe will do anything to keep hold of their prized possessions even as the transfer season gains momentum.

Such clubs as part of their business strategies hand their stars huge contracts with hefty release clauses inserted in them to put off any potential buyers and/or get a massive transfer fee.
Below is the list for the top ten football players with the most costliest release clause.

It looks like money well spent, with Vinicius Jr proving to be the match-winner in the Champions League final.

It would cost you just shy of £600m to buy him, but rumour he has been offered a new contract that would increase his value to £1billion.

9. Brahim Diaz, Real Madrid, £641m
The Spanish midfielder, 22, spent his youth career at Malaga and then Manchester City, who he made his debut for in 2016.

But, with competition for places fierce, Diaz was bought by Real Madrid for £16m.

However, he’s flattered to deceive and his £641m release clause certainly doesn’t appear to be justified.

The last two seasons have been spent on loan at AC Milan, where he just won Serie A.

8. Luka Modric, Real Madrid, £641m
The former Ballon d’Or winner is getting on a bit at 36, so you’ll be hard-pressed to find anyone willing to pay £641m for his services – despite his quality.

Modric has committed his future to the club, recently signing a one-year extension.

The Croatian legend is a proven winner – having lifted the Champions League trophy five times.

7. Federico Valverde, Real Madrid, £641m
A key man in the middle of the park for the LaLiga giants, the Uruguayan’s worth is obvious to Carlo Ancelotti’s men.

Mind you, £641m for a tough-tackling defensive midfielder would be an extortionate amount to pay.

An extension he signed in 2021 will keep him at the club until 2027, when the 23-year-old’s release clause might just rise.

6. Antoine Griezmann, Barcelona, £685m
The French forward’s future is up in the air, as is the fee that could be paid for him.

Barcelona loaned Griezmann out on a two-year deal to former club Atletico Madrid, who have a £34m option to make the move permanent for the 31-year-old next summer.

That’s far less than the £685m release clause Barca insisted upon in his contract, when they signed him from Atletico for £108m in 2019.

5. David Alaba, Real Madrid, £726m
The Spanish champions snapped up Alaba in 2021 on a free transfer – giving the 30-year-old a five-year contract worth around £17million a season.

They then protected their investment by slapping a £726million clause in the deal, that doesn’t expire until 2026.

Previously with Bayern Munich, Alaba enjoyed a successful first season with the club – winning LaLiga and the Champions League.

4. Ronald Araujo, Barcelona, £846m
The future of Uruguayan defender Araujo, 23, was anyone’s guess until this summer, when he finally penned a new deal with the Catalans.

Astonishingly, they insisted on a £846m release clause that deterred interested parties, including Liverpool, Man City and Man Utd.

“FC Barcelona and the player Ronald Araujo have reached an agreement to renew his contract until 30 June 2026. The buyout clause stipulated is set at €1bn,” the club revealed.

3. Karim Benzema, Real Madrid, £846m
Arguably the best player in the world right now, Benzema signed a new deal with Real Madrid in 2021 that will see him stay at the Bernabeu until 2023, when he will be 35.

But, if he’s still scoring like he is at the moment – at the rate of 44 goals a season in a Double-winning campaign – that will surely be extended again.

Will it dwarf the £846m current release fee? Don’t bet against it.

2. Pedri, Barcelona, £846m
The future is bright for Barcelona, who recently tied up teen superstar Gavi with a £86m release clause in his deal.

Before that, it was Pedri who inked an astonishing contract last year at just 18 – that will keep him at the club until 2026.

That is, unless, someone wants to pay £846million to buy him.

Seeing he’s on a reported £38,000-per-week, you could say Barcelona are winning the battle of club versus player battle.

Like Pedri, he became the second player at the club to have a ridiculously inflated price tag put on his head.

However, he’s struggled for injuries ever since – after inheriting Lionel Messi’s No10 shirt.

Considered one of the best young players in the world, at 19 he has the world at his feet.