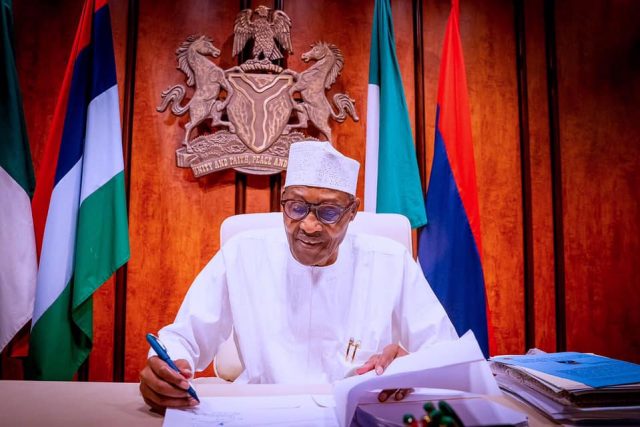 President Muhammadu Buhari has listed Corruption as the main hindrance to government investments in the education sector.

Buhari pointed out that corruption in the education sector continues to undermine investments, while critics downplay funding by focusing only on budgetary allocations, urging a more comprehensive re-evaluation of expenditure.

Speaking at the Fourth National Summit on Diminishing Corruption in the Public Sector held in Abuja, Buhari said that measuring financing of education sector should include total education budget of each year by both federal and state budgets and other financial commitments in their totality.

The Summit was organised by the Independent Corrupt Practices and Other Related Offences Commission (ICPC), Office of Secretary to Government of the Federation (OSGF) and Joint Admission and Matriculation Board (JAMB).

“This year’s summit will mirror how corruption undermines educational policies, investments and create an unfriendly learning environment for our youths.

“Incessant strikes especially by unions in the tertiary education often imply that government is grossly underfunding education, but I must say that corruption in the education system from basic level to the tertiary level has been undermining our investment in the sector and those who go on prolonged strikes on flimsy reasons are no less complicit.

“The 1999 Constitution places a premium on education by placing it on the Concurrent List, thereby laying the responsibilities of budgeting and underwriting qualitative education on both the Federal and State Governments.

“The total education budget for each year is therefore a reflection of both federal and state budgets and should be viewed other financial commitments in their totality.

President Buhari noted that the aggregate education budget in all 36 states of the Federation and that of the Federal Government, combined with the internally generated revenues of the educational institutions themselves were also subjects that require attention of critics of government funding of education.

“In line with the National Policy on Education, this administration has been implementing the Home-Grown School Feeding Programme to provide a free balanced meal per day for each child that attends public primary school in order to encourage school enrolment and facilitate accesses to universal basic education.

“The Safe Schools Initiative is an expression of government’s commitment to continue to work towards the protection of students, teachers and the school environments,’’ the President added.

He expressed concern on the manifestation of various forms of corruption in the education sector.

“I am aware that students in our universities for example, use different terminologies to describe different forms of corruption they experience on our campuses. There is sorting or cash for marks/grades, sex for marks, sex for grade alterations, examination malpractice, and so on.

“Sexual harassment has assumed an alarming proportion. Other forms of corruption include pay-roll padding or ghost workers, lecturers taking up full time appointments in more than one academic institution, including private institutions, lecturers writing seminar papers, projects and dissertations for students for a fee, and admission racketeering, to mention only the most glaring corrupt practices,’’ he said.

President Buhari commended the ICPC for investigating and prosecuting sexual harassment as abuse of power in educational institutions.

“I approve and encourage them to continue to do so,’’ he noted.

The President assured that the Government will continue to fund education within realistically available revenue, urging stakeholders, including the media to equally advocate for transparency in the amount generated as internally generated revenue by educational institutions and how such funds are expended.

“Corruption in the expenditure of internally generated revenue of tertiary institutions is a matter that has strangely not received the attention of stakeholders in tertiary education, including unions.

“I call on stakeholders to demand accountability in the administration of academic institutions and for unions to interrogate the bloated personnel and recurrent expenditure of their institutions. Let me also implore the Unions to work with government to put faces and identities to names on the payroll,’’ the President added.

“Due to declining resources, government cannot bear the cost of funding education alone. I task our academics to attract endowments, research and other grants to universities, polytechnics and colleges of education similar to what obtains in other countries.

“That is a vision which we will continue to aspire and build,’’ President Buhari stated.

He congratulated the sole winner of 2022 Public Service Integrity Award, Superintendent Daniel Itse Amah, who rejected the sum of $200,000 to drop a case, and followed up with investigations until the culprit was prosecuted.

“I also commend the Chairman, ICPC, the Secretary to the Government of the Federation and the Registrar of JAMB, for organising this summit and bringing together the three arms of Government, MDAs and other stakeholders to deliberate on corruption in the educational sector of Nigeria.’’

President Buhari noted that he was pleased to have participated in each of the previous summits organized by the current Board of the ICPC, under the leadership of Bolaji Owasanoye, SAN, in collaboration with the Office of the Secretary to the Government of the Federation, targeting different aspects of the administration’s commitment to fight corruption.

“From inception, this administration has consistently made the fight against corruption a cardinal pillar of its comprehensive commitments and agenda to reform the nation.

“We signed up to the Open Government Partnership and adopted the Open Government Declaration under which we committed to have robust anticorruption policies, mechanisms and practices that ensure transparency in the management of public finances and procurement, and to strengthen the rule of law.

“We have tried in the last seven years to keep faith with these commitments,’’ he added.

In his remarks, Secretary to the Government of the Federation, Boss Mustapha, said the education sector had steadily assumed a pariah status because of corruption that erodes values and resources, noting that education had become an enabler of corruption, instead of a tool for reforms and molding character.

According to him, “Corruption is eroding the practical purpose of education at all levels, primary, secondary and tertiary.’’

The SGF urged leaders in the education sector to emulate Ishaq Olarewaju Oloyede, the JAMB Registrar, who had provided “good example of anti-corruption leadership.’’

The Minister of Education, Adamu Adamu, said “JAMB is, without doubt, one of the parastatals that has achieved what no other agency has achieved by extending the boundaries of transparency and accountability in public service.’’

He said corruption was a manifestation of educational failure in society.