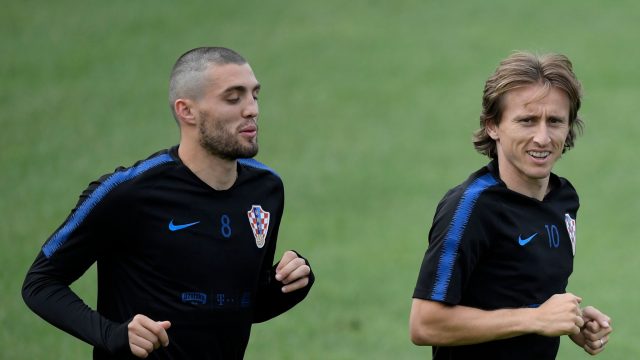 Chelsea midfielder Mateo Kovacic, Real Madrid star Luka Modric are two of the top players that made the list of the Croatia’s provisional World Cup squad heading to Qatar in November.

Zlatko Dalić’s side, who beat England in the 2018 World Cup semi-finals before losing to France in the final, have named a 34-man squad.

FIFA stipulations meant that national teams had to submit a provisional squad, up to a maximum of 55 names, by October 21, before the deadline for a final 26-man squad on November 13, a week before the tournament gets underway.

Among the names in the Croatia squad are several Premier League players including Tottenham’s Ivan Perisic, and Southampton defender Duje Caleta-Car.

Former Liverpool defender Dejan Lovren is included, while legendary Real Madrid midfielder Luka Modric – who has won 154 caps for his country and has announced his intention to retire from international football after the tournament, is also in there.

Josko Gvardiol, the RB Leipzig defender who was widely linked with a £78m move to Chelsea in the summer is among the 34 players, while former Leicester City striker Andrej Kramaric is included.

Mislav Orsic, who scored the winner for Dinamo Zagreb in their memorable victory against Chelsea in the Champions League earlier this season, is in the 34-man party.

Dalic’s side are seen as a potential dark horse in Qatar after they won their Nations League group which included France, Denmark and Austria.

Information from other nations on their squads has been quite scant, with England boss Gareth Southgate not publicly announcing his provisional squad or reportedly informing players.

Germany last week became the latest nation to release their list of players, with the headline news including a recall for World Cup match-winner Mario Gotze – who hasn’t played for the national team since 2017, and the inclusion of Borussia Dortmund wonderkid Youssoufa Moukoko.

There were also places within the 55-man provisional squad for Premier League players such as Bernd Leno, Thilo Kehrer, Robin Koch, Ilkay Gundogan and Kai Havertz.

Newcastle defender Sven Botman also made the cut, despite pulling out of the Under-21 squad last month to focus on playing for the Magpies.

Uruguay are the only other nation to have publicly announced their list of players, naming a full 55-man squad.

Croatia get their World Cup campaign underway on November 23 when they face Morocco.

Braimah Of NIWA Gets Nigerian Society of Engineers’ Fellowship