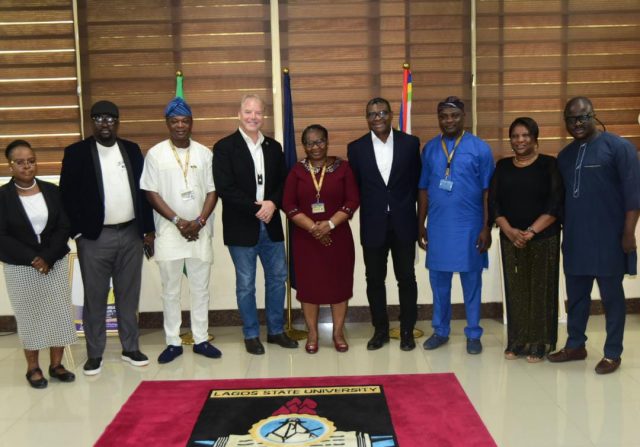 Determined to curb and reduce the rate at which young creatives in Nigeria especially those in the Tech world relocate to western countries for better means of survival, KASI Cloud in conjunction with Infrastructure Masons (iMasons) is set to partner with the Lagos State University on cloud infrastructure.

The meeting which took place at Vice Chancellor’s Conference Room, Babatunde Raji Fashola Senate Building, main campus, Ojo on Thursday, 27th October, 2022 with officials of both bodies was aimed at awarding 55% scholarship to staff and students of the university who will be trained in cloud infrastructure.

Ibiyemi Ibilola Olatunji-Bello, vice chancellor, lauded the company for extending this great opportunity to Lagos State University, reiterating that LASU has the best students and ICT experts.
Olatunji-Bello who was represented by the Deputy Vice Chancellor, Administration Adenike Boyo appreciated the Chief Executive Officers (CEOs) of Kasi and iMason, Johnson Agogboa and Dean Nelson for.
She stated that the bodies are in talks to sign a Memorandum of Understanding (MoU) which will be beneficial to both parties.

The meeting, facilitated by the Director, Directorate of Information and Communication Technology, Prof. Toyin Enikomehin, also had the Registrar, Mr. Emmanuel A. Fanu, the Bursar Said Babatunde Olayinka, represented by Mr. Olabisi Yusuf, and the University Librarian, Emmanuel Layi Adebayo, represented by Henrietta Asaju in attendance. Other senior officials of the Vice Chancellor’s office, Acting Dean, Students’ Affairs, Tajudeen Olumoko, and the Deputy Registrar, Legal Unit Olajumoke Boyejo were at the meeting.

The meeting was concluded with an exchange of gifts by leaders of the two bodies, after which the students who would be the major beneficiaries of the initiative were addressed by Johnson and Nelson.