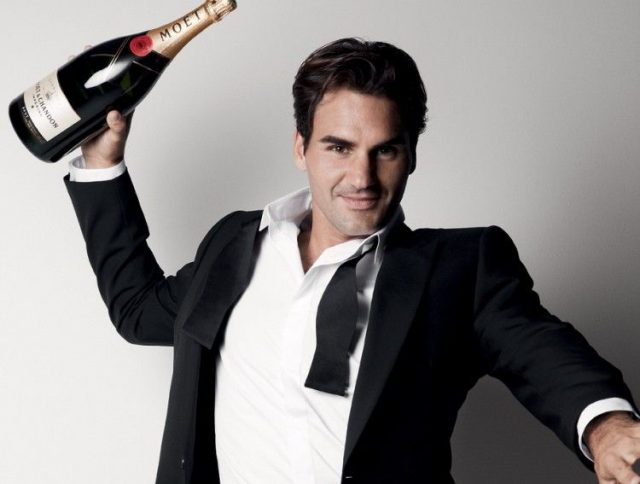 The initiative according to the company, will see friends and fans around the world send social media messages of love, appreciation, memories, and wishes to celebrate the tennis star, as he starts a new life chapter away the tennis court.

According to the organisers, the initiative is a well-deserved celebration, an extraordinary tribute worthy of a man who is a universal inspiration of elegance, respect and generosity and whom Moët & Chandon is proud to have as its ambassador since 2012.

Berta de Pablos-Barbier, President and CEO of Moët & Chandon, said it is a proud moment for the brand to toast Roger Federer, an extraordinary ambassador whose close ties of friendship with the House will continue well beyond his professional tennis career.

Pablos-Barbier, said the bond between the brand and Roger Federer was sealed in 2012, when he was welcomed as a global brand ambassador and friend of the Maison, adding that Moët & Chandon has been by Roger’s side during his most celebrated moments, elevating the relationship into an exciting adventure defined by shared values of excellence, elegance.

According to him, Roger Federer’s innovation and overall glamour and style resonate strongly with Moët & Chandon, echoing the House’s core values of longevity, success, and a mastery of craft, true to an inimitable style with great attention to detail.

“Acknowledging that celebration is at the heart of each era and culture, is aiming at elevating exceptional moments of togetherness with its effervescence. From trying small to achieving big, from a first step to a milestone, the House celebrates life and everything that comes with it, sealing unexpected and exciting encounters, ” Pablos-Barbier said.

He further said the House is looking forward to seeing speeches, dances and all good vibes dedicated to its beloved ambassador, adding that the social media videos, photos, and messages will be compiled into a digital wall of fame, curated by Moët & Chandon, accessible via the House’s digital platforms.

“As a special dedication to Roger Federer, the House has worked with the French film and video director Emmanuel Cossu, one of the most avant-garde voices of his generation, to produce a visual record of testimonials by an exclusive circle of remarkable personalities who have marked Roger’s life, he said.

Commenting further, Pablos-Barbier, said that for every post shared with the hashtag #ToastToRoger, Moët & Chandon will make a donation on behalf of the participants to the Roger Federer Foundation, a non-profit organisation committed to enabling parents and local communities in providing children with the opportunity for a good education.

“The initiative echoes the House’s previous involvements in Roger’s philanthropic causes, such as The Match For Africa series, also conceived with the aim of raising funds for his foundation”,

Roger Federer speaking during his 20th-anniversary celebration in 2018 was quoted to have said “One day, I wish my name to be known more for what the foundation has achieved than for my sports titles”.