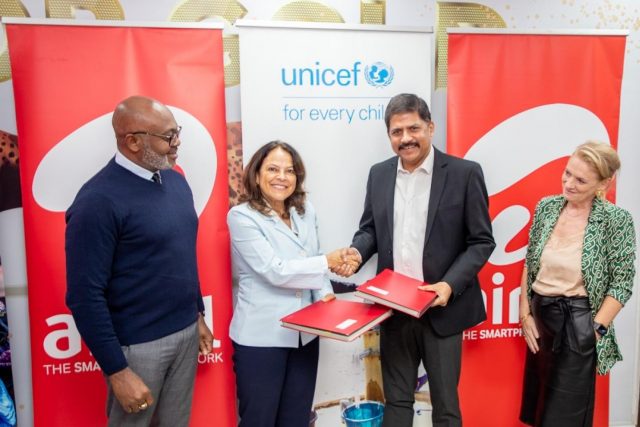 Airtel Nigeria as part of its commitment to grow digital learning has partnered with United Nations Children’s Fund (UNICEF), to launch the Re-imagine Education initiative in Lagos.

The programme is aimed at connecting 620 schools and over 400, 000 children to digital learning platforms.

According to him, the partnership was signed at a media briefing, where Surendran Chemenkotil, the chief executive officer of Airtel Nigeria, and UNICEF Country Representative in Nigeria, Cristine Munduate signed the impactful and life-touching agreement.

The partnership will deliver digital learning by zero-rating some educational websites on the Learning Passport and also connect the schools to the internet on Airtel Nigeria’s high-speed data network.

“We are committed to changing the narrative of education of African children, tomorrow’s leaders,” Oparah said.

Babagana Yahaya Aminu, Education Specialist (Technology for Education) at UNICEF, while reacting to Oparah’s comment, lauded the initiative. He reaffirmed the commitment of the partnership, adding that it will enable learners to access quality curriculum-aligned materials on the Nigeria Learning Passport.

“More than 8,000 more people have signed up on the Nigeria Learning Passport. The Re-imagine Education initiative, launched in Lagos, Nigeria by Airtel and UNICEF, will bring digital learning platforms to 620 schools and more than 400,000 children. One million African children will have access to online education, thanks to Airtel Africa and UNICEF’s historic $57 million five-year partnership to bring broadband internet to 1,400 classrooms across the continent. Thank you, Airtel,” Aminu said.

UNICEF is an agency of the United Nations responsible for programmes to aid education and the health of children and mothers in developing countries, a vision that clearly aligns with Airtel Nigeria’s, which is also focused on liberating and empowering the underprivileged, disadvantaged and hard to reach persons in the society.