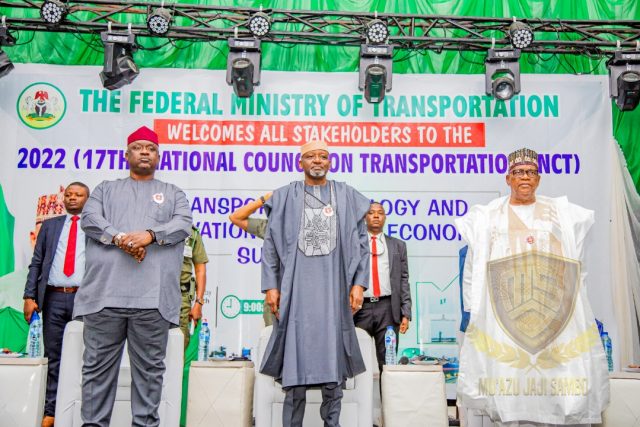 The Minister of Transportation, Mu’azu Jaji Sambo has said that technology has the potential to improve transportation’s contribution to Nigeria’s development.

The Minister made the call in Abuja during the executive session of the 17th National Council on Transportation themed ‘Transportation Technology and Innovations for Socio-Economic Sustainability.

Sambo said the transportation sector is unique and dynamic adding that it does not exist for itself but rather serves as a veritable platform for other sectors of the economy to flourish.

“Dear Commissioners and other Stakeholders, you will all agree with me that the premium placed on the transportation sector cannot be overemphasized. It encourages, among other things, social interaction and socioeconomic integration, access to education, healthcare, commerce and development.

“Therefore, it is appropriate to say that transportation is to the economy as blood is to the human body. To further improve on the contribution of Transportation to Nigeria’s development, we need to leverage the potentials of Technology hence, the relevance of this years’ theme,” he said.

“Technology contributed about 18.44% to the Nations GDP in the second quarter of 2022 as against 6.33% contribution of the oil Sector.

“Hence, there is no gain saying that all over the world, Technology/ICT has taken the centre stage of human interactions as it has reduced cost of production, ensures efficient movement of goods & Services, simplifies communication processes and improves overall quality of life.

“If transportation is to continue to be relevant to drive an innovative and digital economy, then Transportation Stakeholders in Nigeria must envision the future together, strategize, and adopt SMART goals that can be implemented to withstand the dynamic trends and changes the sector is constantly experiencing around the world,” he said.

Sambo said now is the time for stakeholders in the Transportation Industry to plan and executive their plans together and maximise the benefit of the lean resource available for transport development at all levels.

He also said that the intent of the Transport Sector Reforms was to break the monopoly that was hitherto exclusive to the Federal Government and create a new regime where States and the private sector can also invest.

“These policies are already operational in the country even though the Bills to change the limitations imposed by enabling Acts of some of our Agencies that were created as Corporations are still in the National Assembly.

“Nevertheless, with the success of the concession of the Nigerian Seaports since 2006, Nigerians can be rest assured that the Federal Government is gradually restricting itself to policy formulation and regulatory functions while operations are commercialised.

He said the Lekki Deep Seaport is a perfect testimony of the new template of development in the transportation industry, where the host State, Lagos and private investors are the major financiers of the new port.

“Another area where the Federal and State must continue to develop a close tie is on safe and secure transportation. This is a major cardinal objective of the Federal Ministry of Transportation in the National Development Plan (NDP).

The States/FCT and their Local Government Authorities must factor in their local plans on how to secure all transportation infrastructure (Seaports, Roads & Bridges, Rail tracks, Airport Terminals) that passes through or are within their domains, this for us, is one of the major ways of achieving a Sustainable Socio-Economic development,” he added.

Sambo however said irrespective of security equipment, gadgets and solutions, the role of the human element remains paramount in the securing of critical Transportation infrastructure which are so capital intensive to maintain or restore when damaged.

According to him, such reward and recognition of achievers can be planned in consultation with the Federal Ministry of Transportation and hosted during the Council meeting.

“The need to innovate on how to engender implementation of the decisions that are reached in this Council is one that should be encouraged and sustained,” he said.

Speaking on some the achievements made in the sector in recent times, Sambo said the successful deployment of the Deep Blue Project and its commissioning in 2021 has brought about the significant reduction in piracy and kidnappings in Nigeria waters and Gulf of Guinea (GOG).

“This has brought about the removal of Nigeria from International Maritime Bureau’s Red List. There is reduced vessel turnaround time arising from the deployment of technology in the payment administration in our seaports by the automation of the collection and processing of shipping documents.

“The processes leading to the disbursement of the Cabotage Vessel Financing Fund (CVFF) is on the way, the Ministerial Committee on the selection of the four (4) Primary Lending Institutions in line with the guidelines for disbursement has been constituted,” he added.

The Minister revealed that the Federal Government has declared the Dala Inland Dry Port, Kano as a Port of Origin and Destination and that the Onitsha River Port has been successfully concessioned to Universal Elysium Consortium.

“The approval of the National Transport Policy (NTP) is one of the low hanging fruits I identified during my assumption of office in the Ministry, we are poised to pursue it this time to a logical and fruitful end.

“I studied the antecedents and saw how much work this Council has put in the development of the document, that labour will not be in vain,” he said.

The Minister further said the ugly incident of the attack on the Kaduna bound train on the 28th March, 2022 where some of the passengers onboard were kidnapped cannot be forgotten in a hurry.

Sambo said the incident which resulted in the suspension of train services on the Abuja-Kaduna standard gauge rail line is adversely affecting the revenue of the Nigerian Railway Corporation, businesses along the corridor and the Nigerian economy in general.