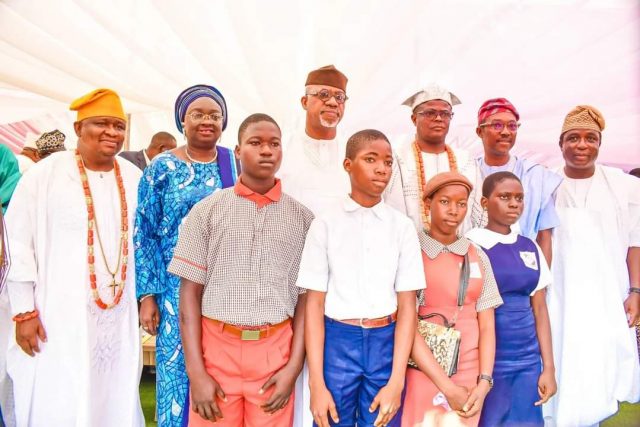 Determined to support the educational aspirations of the younger generation of Yewa descent, Adekunle Adebiyi, Chief Commercial Officer at Itex Integrated Services Limited has revealed why he is offering scholarships to youths with financial difficulties.
According to Adebiyi, children are our future and by supporting them, we are making direct investments into the future.
Adebiyi, a former senior executive at MTN while speaking at the presentation of scholarships to 30 secondary school students held at Ilaro-Oronna Festival in Ogun state, said it is important to find a way to reach back into communities to seek avenues to offer assistance where possible.

“We have a duty both to ourselves and the communities around us”
For four years running, Adebiyi has provided scholarships to students in the Ogun state as a means of empowering young adults for the future. This year, a total of 30 students were selected from 6 schools in the state – the Anglican Grammar school, Baptist High School, Emmanuel Commercial High school, Egbado College, Itolu Community High school, and Oronna High School in Ilaro, Yewa South Local Government of Ogun State.

The scholarship was presented to the beneficiaries at the Ilaro-Oronna Festival grand finale, with dignitaries such as the Dapo Abiodun, Governor of Ogun State; Noimot Salako-Oyedele, deputy governor of the state and Tolu Odebiyi, senator representing Ogun, West.

“I understand and appreciate the difficulties that millions of parents across the country face when they have to choose between feeding their families and education, and I am invested in doing what I can to ease that burden.”

According to statistics, Nigeria has the highest percentage of out-of-school children (OOSC) in the world. Matthias Schmale, the UN humanitarian coordinator in Nigeria, issued a warning in August 2022 that Nigeria was unlikely to meet the global goal of providing universal, inclusive, and equitable basic education for all school-age children by 2030 and pointed to low educational investment as an influencing factor.

Despite the fact that primary education is legally free, according to a report by the United Nations Educational, Scientific, and Cultural Organization (UNESCO), 20 million children in Nigeria were estimated to be out of school as of October 2022. It is easy to identify the reason for the rise in the number of out-of-school children given the current state of insecurity in the country, the fact that 40 percent of Nigerians live in poverty, and the recent flooding that displaced over 1.5 million Nigerian children.

Lamenting the situation, Adebiyi said, “That a country with excellent human assets will disregard its younger generation is a major source of worry. Many of our national treasures will never be uncovered because they were forced to drop out of school and pursue a trade in order to support their family.

Many of these youngsters would prefer to stay in school, but if the government and well-meaning citizens do nothing, learning poverty will only continue to increase among Nigerian children”.