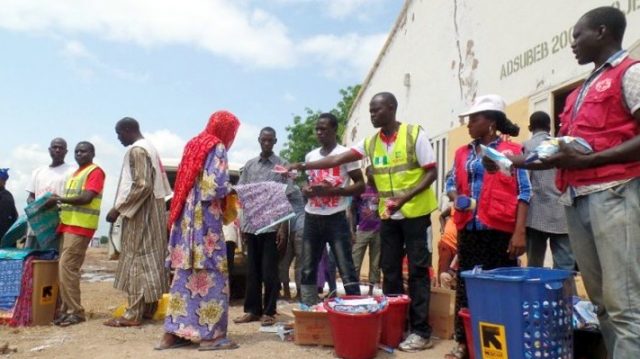 Ahmed in a statement issued in Abuja by NEMA Head of Press, Manzo Ezekiel, hinted that the distribution would be carried out in four camps that are located in Maiduguri namely: Muna Kumburi, Gongulon, Madinatu I and Madinatu II.

These, according to him, were in addition to the earlier distribution in December 2022, during which about 8,000 households benefitted in five camps at El-Miskin, Doro, Ashiri, Shuwarin and Nganzai.

Ahmed who was represented by Fatima Suleiman Kasim, director of Planning Research and Forecasting said each of the households is expected to have 59.8 kilogrammes of food basket made up of 25kg of rice; 25kg of beans; 4kg of Masa vita flour 2kg of tomato paste; litres of ground nut oil; 1kg of salt and 0. 8kg of Maggi cubes.

Salman, for the donation delivered through KSrelief, Ahmed said the gesture would go a long way to benefit the IDPs and complement the efforts of the federal government.

He said: “Our partnership with KSrelief dated back to 2018. Between 2018 and 2021, the Centre donated relief items (food baskets) to some IDPs in Borno, Yobe and Zamfara States.

“KSrelief has been very benevolent to the country. Interventions have been beneficial as evident from the positive testimonies from the IDPs.

“The food distribution is being carried out directly to the IDPs in the camps by NEMA staff in collaboration with staff of Borno State SEMA.”