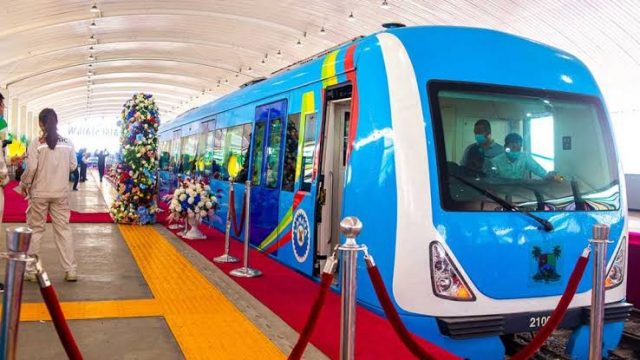 Speaking at the event, Babajide Sanwo-Olu, the Lagos State Governor, said the line would accommodate about 25,000 passengers per hour, thereby reducing travel time, improving the quality of life of people of Lagos State, and making the state one of the most resilient mega-cities in Africa.

He said the infrastructure will position Lagos to compete favourably with other megacities globally.

“This iconic Marina Station would be the largest and busiest in Africa. It has the capacity to process about 450 passengers per minute, meaning that in an hour this station can process about 25,000 passengers,” he said.

Sanwo-Olu also disclosed that he would invite the President again to Lagos to commission the Red Line, which he described as a bigger rail corridor project compared to the Blue Rail Line.

Cui Jianchun, the Chinese Ambassador to Nigeria, said the completion of Phase 1 of the project is a demonstration of the harmony in the bilateral relations between Nigeria and his country.

The first phase of the project executed by the Lagos State Government spans 13 kilometres. It has five stations at Mile 2, Suru-Alaba, Orile Iganmu, National Theatre, and Marina.

The master plan of the Blue Rail Line has six rail lines and one monorail, 14 Bus Rapid Transit corridors, over 20 water routes, and several major roads.

Why I Am Supporting Younger Generation Of Yewa Descent – Adebiyi