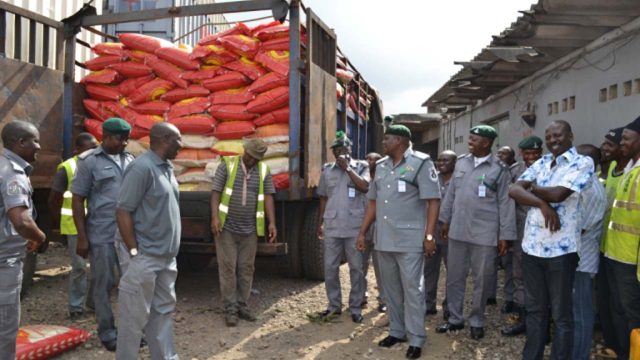 According to Hussein Ejibunu, Acting Controller of the unit said the seizure was carried out in Lagos, Ogun, Oyo, Osun, Ekiti and Ondo states in the period under review.

Speaking in Lagos while showing journalists the seized items at the unit’s warehouse in Ikeja Lagos, Ejibunu said the items include foreign parboiled rice, vehicles, drugs, textiles, petroleum products and other items on the import prohibition lists.

Ejibunu said rice topped the list of seizures with 93,102 bags equivalent to 156 trailer loads. There were 108 automobiles comprising of trucks, tankers, cars and motorcycles that were either smuggled or used to convey smuggled items.

Other seized items 2,354 kg and 4,975 tablets of Cannabis sativa, 233 cartons of 225 milligrammes as well as 82 packs of 225 milligrammes of Tramadol and 656,414 liters of premium motor spirit (PMS), which is about 20 tanker loads of fuel. Speaking on the arrested smugglers, Ejibunu said the unit secured seven convictions, with 14 charged to court and are at various stages of investigation and prosecution, while seven suspects are in detention.

Ejibunu said the unit lost four of its officers while confronting smugglers, adding that those behind some of the killings were arrested to face justice.

Speaking on revenue generation, Ejibunu said the unit recovered shortfalls in duty payments and achieved a total collection of N878, 344, 486.96 as revenue for the government in 2022.

He said the collected revenue would have been lost but for the intervention of the unit checking to be sure correct duties were paid into government coffers.

He said within the period under review, the unit provided support for facilitation of legitimate trade, ensuring ease of passage for compliant traders and double-checking suspected non-compliant traders.

CONUA Rejects Half Pay By FG As Another ASUU Strike Looms