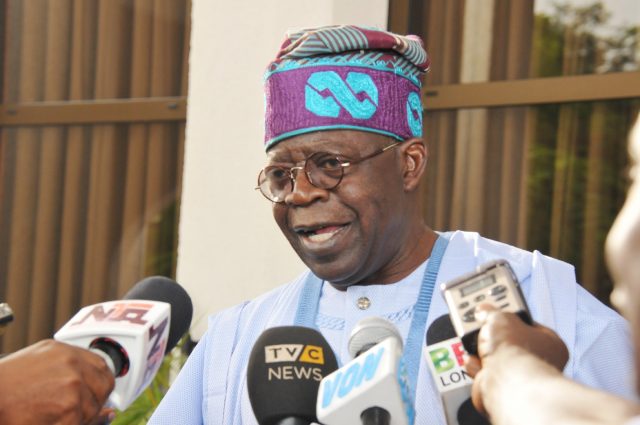 As the campaigns for February 25, 2023, presidential election intensifies, Bola Ahmed Tinubu, All Progressives Congress (APC) presidential candidate has said former President Olusegun Obasanjo is not qualified to recommend or endorse anyone as President of Nigeria because of his failures.

Tinubu while speaking at the APC presidential campaign rally, held at the University of Benin Sports Complex, Ugbowo Campus, Benin, said Obasanjo failed to develop the country when he had the opportunity.

According to him, Obasanjo was rather fighting Atiku Abubakar, his then Vice President while accusing each other of spending the country’s money for their personal comfort.

The APC flag bearer pointed out that after spending $16 billion on electricity, Obasanjo and the PDP government could not deliver electricity. Tinubu recalled how, as Governor of Lagos: “I brought Enron to solve electricity problem and help the Lagos economy but Obasanjo and PDP frustrated it. They punished Lagos people and me, and even began deducting our money.

“I created local councils in Lagos to accelerate development and create employment for our people but Obasanjo seized our allocation and punished us for that.

“That was wickedness and such a man said he endorsed a man for you to vote as President. Can you follow such a man? Can Obasanjo recommend a leader for anyone in Nigeria? A man who does not know the way cannot show the way.”

On his main opponent, Atiku Abubakar, Tinubu said the PDP presidential candidate is not qualified to be President of Nigeria, having indicted himself in his record as a civil servant.

He said: “Atiku and Obasanjo accused themselves of using Nigeria’s money to buy cars for their comfort. Atiku was a customs officer who said he made money by selling cars. That is smuggling.”

“He didn’t even know that a civil servant cannot do any other business apart from agriculture. That is enough to disqualify him and he is not fit to be President.”

On his plan for the economy and Edo people, Tinubu said it is time to eliminate darkness and make the economy of the country productive through massive industrialisation, promising to make Edo State a hub of industrial activities and an energy state.

Tinubu speaking further lauded the return of Benin artefacts by some Western nations but urged the countries to pay some money to Edo State, having made huge money from the returned artefacts through tourism and exhibitions.